Impact of Globalisation on US Economy Assignment Sample

Impact of Globalisation on US Economy

As per the report of the World Trade Organisation, globalization has induced many uncertainties in the global market. These have significantly affected the bilateral trade between the US and China. It is important to note that even though the two nations make up for 40 percent of the overall global output, they make up lower than 3.2 percent of the global trade. This is not only the case with China (Roberson, 2018). Due to increasing uncertainties, the international trade of the US with its allies in Europe and Canada is also getting affected. There are many positive things globalization has done to the Americans. The first and foremost is the American won the communism war by freeing up the citizens from government regulations. The most significant impact of the globalization on the US was the deregulation of the US market (Roberson, 2018). This has allowed firms to carry out innovation. This has helped the American firms to sustain their position in the international market. Globalization has created a plethora of opportunities that helped the US economy to grow. According to Fortune, out of 500 top global firms, 134 are headquartered in the US. This makes the US dominate the global economy (Roberson, 2018).

Looking into the GDP rankings of the world's biggest economies, the USA is topping the list since the past 3 decades. This can be seen in the fig. 1 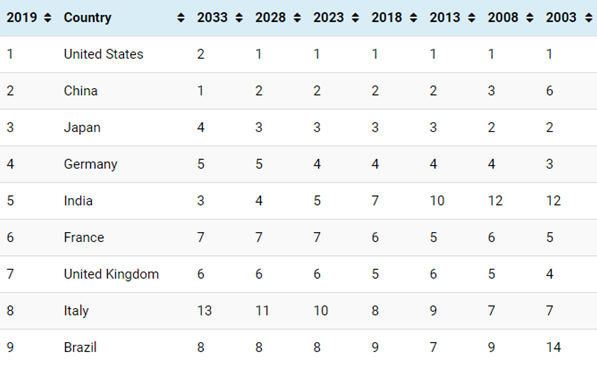 Talking about the role played by the US government, it played as the key agency in bringing about the major change. The government understands that more than 95 percent of global consumers live in nations other than the US. The government formulated the growth strategy keeping the global consumer as the pivotal point. This helped the US to generate opportunities, wealth, and growth. They strengthen their education, infrastructure, skills-based training, etc. The role of the US government was quite pivotal as it allowed the larger economic integration by adopting the policies that are more market-oriented regulations and policies (Roberson, 2018). These helped in removing the barriers between two nations and vanished the control over capital investment, foreign exchange, and removing the barriers in the financial sector, especially the banks. The major game-changing step was the establishment of WTO that brought stability and uniformity in the international market. The results of such measures were very convincing as the USA became the leader in the international market. The current international trade of the USA with other countries are shown in figure 2.

Talking about the impact of the globalization on the community, the globalization received a mixed reaction from the Americans. There are varieties in people's perception. Some believe that globalization has improved their living standards. With the increased integration within different economies of the world. Americans got wealthier and improved their quality of life (Roberson, 2018). The citizens have escaped from the tyranny of regulatory bodies and unionism. This made them free to carry out innovation and as a result, many biggest software and tech-giants, such as Microsoft, Apple, Amazon, etc. The impact of globalization is profound on the low income and middle-income groups. They can avail the best products at lower prices. Another aspect is the globalization is the digitalization of economies (Roberson, 2018). The digitalization has taken globalization to another level by reducing or vanishing the boundary between nations. Nations can exchange technologies, thereby helping different sectors to grow on its own. Some people in America criticizes the globalization for eating up the jobs of people as a consequence of automation. However, this aspect of globalization is quite debating and there is no possible concluding remark to it. Looking into the above-discussed points about globalization, one can understand that globalization has done some great things to the US and its citizens.