The Arctic regions are a significant source of oil and natural gas. Nunavut is Canada's biggest territory and is inhibited by the 33,000 Inuit people. Nunavut is characterized by a prolonged season of darkness, extreme cold, strong hurricanes and fast blowing winds, poor visibility. All these climatic factors adversely affect working conditions and accessibility. According to the US Geological Survey, Arctic regions might have 160 billion barrels of crude oil. This amount of natural resource in a region is a fortune for Canada. Nunavut being the borderline area for Canada, it contributes more than $2 billion in the GDP of Canada. The growth rate of the economy is over 9%. Being rich in mineral and natural resources, it is the biggest economically sound region for Canada and its GDP (Bone, 368). In addition to this, unemployment in the province is higher in comparison to other regions in Canada. Viewing Nunavut as the last frontier of Canada will probably give a negative image of Canada. However, the region has its own significance in the world. Mining is the key resource-based industry.

Due to extreme climatic conditions, the Inuit people have successfully preserve tradition and culture as fishers and hunters for centuries. In addition to this, they have successfully managed to procure their unique music, carving skills, Inuktitut language, etc.Having a consensus government system, Nunavut is incorporating Inuit values of egalitarianism and cooperation in communal decision-making (Viken, et.al, 258).

Talking about the views of the homeland and frontiers about Nunavut, the former consider the North as their homeland that could support their language, culture, and spirituality to flourish. Such a deep belief is grounded on the commitment that is attributed to the sense of place. The majority of the indigenous people have a strong bond with nature and cultural traits. In addition to this, they are also concerned about the economic and political factors affecting their native place. Driven by the sense of place, they have protested against some mega development projects in their homeland like Muskrat Falls Hydroelectric Projects (Bone, 366). On the other hand, the sole motive of the frontiers is to extract natural resources and exploit the natural feature of the region. The idea of the North as the frontier is simplistic and myopic. Conversely, the reality of the North as the homeland is based on complexity and diversity in culture, demographics, and economy. Homeland takes care of the sustainability and resilience of the indigenous lifestyle. On the other hand, the development goals brought by the frontiers are invasive in nature and are dogged by bust and boom cycles. From the perspective of the frontier, north is full of natural resources that are only found in this region only. Therefore, the area is constrained to supply natural resources to the southern world (Bone, 366). In contrast to this, North as the homeland is a connection between the communities across national borders and help in meeting the issues of globalization.

In 2012, the Atlantic Provinces Economic Council came up with its major projects list that comprises mostly the mega projects. APEC highlighted 111 projects having the worth of more than 40 billion dollars. The island of Newfoundland has numerous megaprojects inching towards the completion day by day. These mega-projects have brought billions of dollars into the economy and made the province financially sound. In addition to this, megaprojects have increased the technological dependence of the region and also the political influence (Kozicki, et.al, 25). The Atlantic region is experiencing the major increment in the businesses as new policies are supporting the formation of new ventures and business. In addition, the investment is also improved remarkably and helping businesses to get funds for business expansion. In addition to this, the Atlantic region offers high access to the natural resources that can be used by mega projects and reduce its operating cost (Zhuohen and Kirk, 344). The government is planning a trade corridor from the Atlantic to the arctic that can be further used by businesses like Tele Greenland to trade with North American telecom companies and expand in the international market.

Apart from the mega projects, there are other potential areas for Arctic Canada too. These comprise the cruise tourism, energy, etc. Various shipping companies are researching out a potential route for trade. This would help in booming the vessel movement from the region. In addition to this, the efficiency and time taken for transporting the shipment can be reduced remarkably. In addition to this, an abundance of energy on either shore is turning out to be another economic driver for the region in the coming future.

Western Canada is the major growth center of the country. It comprises provinces, such as Alberta, British Colombia, Manitoba, and Saskatchewan. The Western region of the country is culturally, politically, economically, and geographically rich. The western provinces are continuously leading the growth of the country. British Colombia is on the top of all the regions with a growth rate of more than 3% between 2016-17, whereas the other province is growing at the rate of 2% as per the national data reported by the government official and think-tank (Kozicki, et.al., 17). B.C is emerging rapidly because of an increase in export in the automobile sector. In addition to this, there are other factors too, such as the weakening of the dollar and rise in Toronto's market. All these are combining to transform the economic condition in the west.

Talking about the 2017-18 growth data, Alberta leads the growth of Canada as its economy outgrew all the other provinces including B.C. The growth rate in Alberta was 4.6%. This is the contribution of the energy sector that brings capital investment in the region and the low oil prices in the global market (Kozicki, et.al, 20). In addition to this, the real estate was the second largest contributor to the growth of Alberta. Talking about British Colombia, in the year 2017-18, the province was the second largest contributor in Canada's growth with the average growth rate of 3.7%. The major contributing sectors include real estate, media, and finance. However, in the year 2018, the growth rate declined up to 2.1% but it was still leading the growth of the country. 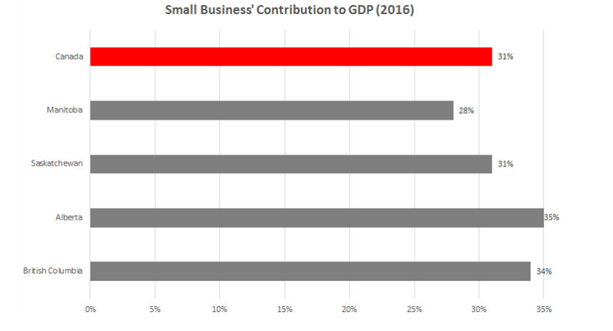 The major strengths of British Colombia comprise the sectors, such as natural resources, service industries, manufacturing, finance, media, etc. All these are leading the economic growth of the country and the province as well. Talking about the other Western Provinces of Canada, Manitoba is having the most diverse economy in the whole of Canada. Its strengths lie in the manufacturing and construction sector. Its growth rate is lagging behind the national economy as its growth rate in 2018 fell down to 1.6%.

Talking about the contribution of the agriculture industry to the West of Canada, it is one of the significant sectors contributing both in economy and employment. However, the employment rate is declining year by year. For instance, the share of agriculture was 7.3% in 1973 reduced to 2.8% in 2013. A total number of employees in the same year was 160,000 in all the provinces in the west. Overall output of the sector was $32.5 billion.

Talking about the forest industry of British Colombia, in 2013, it was offering 145,800 employment to the British Colombians which is 24% of the total employment. In 2013, the sector's output was $31.4 billion. However, the major challenge for the forest industries is a global economic recession that reduces the demand in the off-shore markets, such as China and India.

British Colombia is the extreme west province of Canada. The region is well-known for its picturesque beauty and natural features. The population of the B.C. is over 4.6 million and the majority of them reside in the lower mainland area. Equivalent to France, Netherland, and Germany combined in terms of area, it is inhabited by more than 40,000 immigrants coming across the world. Talking about the economy of the region, British Colombia is economically dependent on its natural resources and they have significantly diversified in order to feature an expanded service and industrial economy. B.C's GDP is heavily contributed by the forestry and mining sector. In addition to this, the telecommunication industry is also contributing majorly in the booming technology and the economic conditions of the country. The tourism sector is also one of the significant sectors for B.C. Thousands of inbound and outbound tourists come to B.C to enjoy its natural beauty characterized by a long coastline, mountains, and eye-soothing greenery.

Talking about its future economic growth, the Canadian government is making efforts to build B.C as a province that is self-sufficient and needs no funds or any support from the federal government. The conventional economic model of government was aiming at growing the region's proverbial economic pie instead of focusing on its distribution. This approach puts social programs at its secondary priority in terms of the importance that can be affordable only when the region has achieved the desired economic targets. However, the government has realized that social infrastructure is the foundation for economic growth. It is impossible to build a region without an inclusive development strategy. According to Zhuoheng and Kirk, the Canadian government is aiming at building British Colombia as a region for the global marketplace (350). Building the economy on the strengths of B.C is the master plan of the government. The five key priorities have been defined for the clean economic growth of B.C:-

All these priorities once achieved will help B.C. in making it a necessary part of Canada and its economy.

According to Fung, the last federal election marks the beginning of a trend by virtue of which political and economic powers are steadily moving or shifting towards the west (517). Even if the core-periphery areas are significant for the country, the roles of regions have switched. People are migrating from the core to the periphery regions in search of work, especially towards the West. Hence, it is relevant to say that in the next 25 years British Colombia will consolidate its position as a new economic core region of Canada. The factors that might affect the future growth of British Colombia are unemployment rate, job opportunities, economic crisis, environmental issues, climate change, political stability, physical infrastructure and capital, natural resources consumption and shortage in future, population and migrating population, technology, human capital, law, and international legislation, etc.

If you think writing a geography essay is a tough challenge that you cannot handle, you should think about hiring professional writers to help with your assignments.

Fung, Archon. "Putting the public back into governance: The challenges of citizen participation and its future."  Public Administration Review  75.4 (2015): 513-522.

Your Paper will Include
Free Product features
Free Service Features