A basic theory of marketing defines that in order to increase the sales, a positioning of the services, as well as products in the market, must be done by the company in such a manner that it has been believed by the customer that there is the requirement of specific service and product or a product or service which is being required by the customers have specific advantage. This assignment will be carried out by considering the case study of Telstra Corporation Limited which is the Australian telecommunication company and operates and build telecommunication networks. Their products include mobile, pay television, voice, internet access and many other products. The objective of this report is to discuss the external and internal market of the company and to make an evaluation of different threats and opportunities which is there in the company.

Industry analysis is basically a tool that facilitates understanding of the company regarding its position relevant to the other organisations that make the production of similar services and products. Understanding the work force in the whole industry is the major component for the effective planning of the strategic (Armstrong et. al., 2014). Telstra belongs to the telecommunication industry of Australia where the consumer makes payment of the premium price due to the distinctive essential characteristics of the telecommunications market of Australia. Industry analysis of Telstra can be done with the support of Porter’s five force analysis:

Porter’s five force analysesare being considered as the strategic management tool for making an analysis of industry and to have an understanding regarding underlying profitability levers in a company. This tool focuses on how a company can develop a sustainable competitive advantage in the industry of telecommunication services. 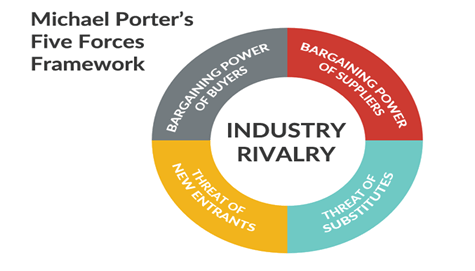 In telecommunication services, new entrants bring new ways, innovation to carry out things and this thing put pressure on the Telstra. With the support of the cost reduction, low strategy of price and provision of the new value proposition to customers, company has to face all such challenges and makes the development of the effective barriers to secure its competitive edge (Plans, TELSTRA BUSINESS LANDLINE PLANS).

The company can tackle new entrant’s threats by making innovation in the services and products, by developing economies of scale, by spending money on the development and research and by the development of the capacities

Buyers are generally a lot of demand. They want to have the best product which is available by making payment of the minimum price. Due to this thing, there will be pressure on the profitability of the company in the long run. The company can tackle the buyer’s bargaining power by developing a large customer base and with the rapid innovations.

Threats of substitute products or services

When the new service or product meets with similar requirements of customers in a distinct manner, the profitability of the industry suffers. There is the high threat of the substitute products if there is the offering of the value proposition which is different from the current offerings (Wilson et. al., 2012). Telstra can handle the threat of substitute products by having a proper understanding of the customer’s need, by being service oriented and by making increment in the customer’s switching cost.

If there is the intense rivalry among the competitors then there will be a decrease in the prices and also in the industry’s profitability. Telstra makes operations in the competitive industry and this makes an impact on the profitability of the company. Company can handle this by the development of the sustainable differentiation, by developing scale so that there can be good competition and by making collaboration with the competitors to make an increase in the size of the market (Jobber & Ellis-Chadwick, 2012).

PESTLE analysis makes provision of the great detail regarding various challenges which are being faced by Telstra Corporation Limited in the macro environment apart from the competitive factors. PESTLE analysis of the company can be defined as follows:

The macro environment factors like interest rate, economic cycle, and foreign exchange rate and saving rates makes a determination of the aggregate investment and demand in an economy. While factors of micro environment like competitive norms make an influence on the firm’s competitive advantage. Telstra can make use of the economic factor of the company like industry and inflation economic indicator and growth rate like consumer spending and industry’s growth supports in forecasting the trajectory of growth (Lovelock & Patterson, 2015). Some of the economic factors which must be considered by the company are:

Culture of the society and the manner in which the work is being done makes an impact on the organisation’s culture in the environment. Shared attitude and beliefs of the population play a major role in how the company’smarketers will have understating of the customers in the market and how marketing message will be designed (Hartley &Claycomb, 2013). Social factors which the company must analyse can be defined as follows:

Technology is making fast disruption in different industries. A company must not just do industry’s technological analysis but also the speed through which there is disruption of technology in the industry (Armstrong et. al., 2015). Analysis of the technology makes the involvement of various steps which can be defined as follows:

Different markets are having different environmental standards as well as norms which make an impact on the organisation’s profitability in the market. Before starting a business in the existing market and making entry in the new market, the firm must makean evaluation of the environmental standards which are required to make operations in the market (De Mooij, 2018). Some of the factors of the environment which must be considered by the company are as follows:

In various countries, legal institutions and frameworks are not enough to give protection to the rights of an organisation’s intellectual property. A firm must make a careful evaluation before making an entry in such kind of markets as this will lead loss of the secret of organisation (McDaniel & Gates, 2013). Legal factors which must be taken into consideration by the company to make entry in the new market can be defined as follows:

The main competitor of the Telstra is Optus which is making operations in the same industry and giving tough competition in relation to the offering of services and products. Market place of the Telstra can be analysed by contrasting as well as comparing its strengths and weaknesses with the Optus.

Competition is basically a rivalry or contest among the two or more than two entities, economic groups, individuals, companies, social groups and many others. It is generally the condition or activity that supports in striving gain or helps in winning by establishing or defeating superiority over the others. Telstra is having strong competition with Optus but still is ahead of it. For beating the competition, there is the structuring of the market. There are different types of market structure which can be defined as follows:

The Telstra’s primary market segment is the working professionals. The majority of the people are from the working class who are fond of the technologies and make use of it in a large manner. It has made an impact on the management of the Telstra to make development of effective strategies in order to fulfil the requirements of customers. Telstra is the pioneer of 4G and 3G services in Australia. They have introduction of these services so as to meet the level of expectation for the primary target market. They also give close attention to the customers’ requirements (De Mooij, 2018). They have made the introduction of the innovative and new mobile phones with different features for customers who are having interest in technologies.

Secondary target market of the company is the people from lower income group. They have made the introduction of some schemes with very affordable price which will be beneficial for the low-income group individuals.

6. Level of involvement (Primary market only)

Therefore, it has also been analysed that the main competitor of the company is Optus and Vodafone. Tough competition is being given by them to the leading company in telecommunication services in Australia.

It can be concluded from the above report that Telstra has set up a milestone in the industry of telecommunication. It has brought various changes in the telecommunication network’s history. They make provision of a large number of services to its customers and have full focus on the demand of the customers. The firm mainly focuses on the working professionals and they are also considered as a primary segment of the company. From the report, it has been analysed that Optus is one of the main competitors of the company and to beat the competition, Telstra is making various strategies. The company mainly operates in the telecommunication industry which is the leading one in Australia and Telstra is having a good position in the industry. Apart from this, it can also be said that, in order to remain at a good position in the market, the company must have a proper analysis of the market and customer requirements.