In the following report, the operations and factors associated with them causing major casualties to the workers working in BHP Billiton were checked. For better evaluation of the issues and organisational challenge, the group decision-making was encouraged for the assessment. The literature review on team decision making and its advantage or disadvantages were mentioned. Also, the secondary data was collected and analysed. It was determined that the fatality factor in the mining sector is rising. This must be because of improper health conditions, poor maintenance of machineries, etc. The data was collected by making use of government statistic portal for casualties. At the end, three Decision-making tools and models are employed. These are pure intuition, dual processing, and bounded rationality.

The global mining sector is one of those sectors that are quite hazardous for workers due to various hazardous operations. According to the United Nation’s data, more than half of the workplace accidents in the mining sector take place in Asia-Pacific region. In the developing country like India, the scenario is quite worse. On an average, 0.3 deaths occurs in coalmines per 1000 workers in India. However, in Australia, the figure is 0.16 deaths. The coal and metal extraction mines are the most vulnerable types of mines where the workers’ vulnerability is quite high. The primary operation of a mining industry is excavation, drilling of tunnels, exploration of minerals in narrow tunnels, and much more. All these are quite dangerous for humans. Hence, there is a strong need of having an integrated workplace health and safety guidelines and standards to stop or mitigate such grave incidents. In the assessment, the Workplace Health & Safety (WHS) policy is trying to be formulated based on the data analysis. For that purpose, the BHP Billiton is the selected organisation and the workplace health and safety is the chosen organisational challenge. The whole process is going to be a team work and therefore, each member is assigned some duty to carry out. The literature review is done on team decision-making and its significance in organisations. Based on the analysis of data and interpretation, some suggestions are provided and the use of decision-making tools are also detailed out. These tools are based on intuition decision-making or rational approach.

The primary aim of carrying out this research work is to access the operations of mining sector from workplace health and safety viewpoint and form a comprehensive policy and standards for BHP Billiton by making use of group decision-making process.

The main motive of formulating this report is to identify the hazardous operations in the BHP Billiton and their likely impact on the health and safety of the workers. Also, the report would provide an overview of the group decision-making on the formulation of the policies related to WHS. For that purpose, the annual reports, government data and reports, and journal articles would be referred to understand what sort of operations in the mining company can be termed as hazardous and what policies and standards can be made to protect the workers (Smit, et.al 2016). The group discussion would be done on the topic and data collected would be analysed by making use of certain tools. The final policy making is done after the consensus of the group members. At last, a few recommendations are provided for the better decision-making based on certain decision-making models, theories, and tools.

It is quite significant to understand that formulation of WHS cannot be done by an individual as there are numerous parameters and aspects. Hence, better analysis can only be done if it is done in group. There are members in the team belonging to the different background having experience in diverse field and expertise in different domain (Xiao, et.al, 2016). Their capabilities are even different. In total, the group has three members. For making this research work on data analytics to be done efficiently and effectively, the work was divided accordingly as per area of interest and expertise (Li, et. al, 2016). For better coordination and execution of the research, the team decided to stay connected and updated through phone calls, whatsapp, and emails. The members are supposed to be present in the weekly meetings in which discussions could be done. Based on their performance and input in the work, each member is rated (See appendix 1). This ensured the quality of research and group decision-making.

In the words of the authorsGardner & Bateman, (2017), team decision making can be defined as the situation in which a group of people collectively takes a decision by analyzing different alternatives provided by the group members. Every individual in the group provides his or her version of a solution to the situation and the best suitable alternative is selected for the resolution of the issue (Gardner & Bateman, 2017). Team decision making is the best way to make all the important decisions in business as when there are more suggestions, there are more possibilities of better and effective solutions.

Use of Data Analytics

Data collection and analytics help in getting insight into the real-world issues the organisation faces. There are numerous ways to understand the data but the most convenient and easiest on is visualisation. In BHP Billiton, the workers have to work at a depth of hundreds of meters. This makes the working conditions quite fatal for them.For better understanding of the organisational challenge, it is important to collect the data relevant to the mining sector and casualties occurred in the past few years. This would help in understanding how concerning the WHS challenge is and why it is important for every organisation to have proper standards and policies regarding workers’ safety. The data has been taken from the Australian government’s online portal for statistics called ‘Safe Work Australia.’ The data was collected by the government agencies by making use of questionnaire, police records of every year, and organisations’ records.

The statistical data has been collected from ‘Safe Work Australia’, a government owned portal that provides data for workplace fatalities in different sector. One can get data from 2003 to 2018 from the website. In addition to this, other government records and data provided in the journal articles is also referred for carrying out this project and group decision-making.

Safe Work Australia is one of the statutory agencies of Australian Government formed under the Safe Work Australia Act of 2008. The agency came into existence in the year 2009 and works for improving work health and safety aspects of organisation operating in the country. This shows that the data is authentic and can be trusted for this project. It is quite important to note that workplace fatalities data is recorded annually and is stored in the workplace-related traumatic casualties’ database. Information is coded as per Australian and New Zealand Standard Industrial Classification, 2006 (Safe Work Australia, 2019). For ensuring the relevancy of the data, pictorial presentation of the data is done (graphs and charts). This helps in checking any discrepancies in the data. The data is fed into MS Excel for analysis purpose.

Analysis and Interpretation of Data

Prior to formulation of the WHS policies, it is quite rationale to discuss the current fatality rate and trends in the mining sector. There are numerous reason for rising concerns for workplace safety measures that would be discussed in next section. 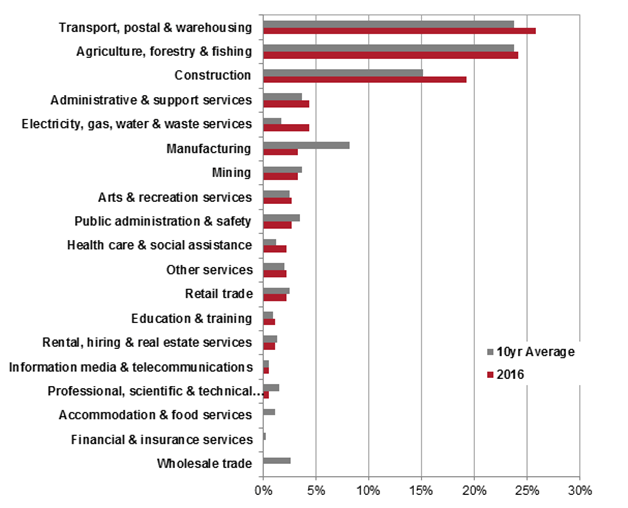 Of all the sectors in Australia, the transport and agriculture sector have highest fatalities rate. On comparing the data of mining sector with its 10 years average, a decline has been noticed but this does not mean that fatalities are decreasing. It means it is again increasing year by year from 2012 to 2019 rather than 1990s to 2000s (Safe Work Australia, 2019).

Table 1: Fatality Rate in Mining Sector (number of casualties per 100,000) 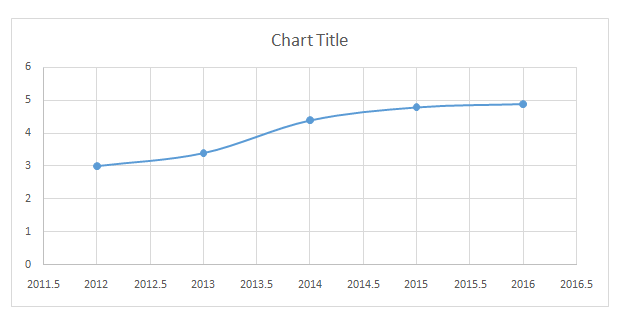 From the above figure, it is quite clear that the fatalities rate in the mining sector is increasing year by year. The organisation and workers are ignoring their safety measures and guidelines causing serious injuries and fatalities as well. 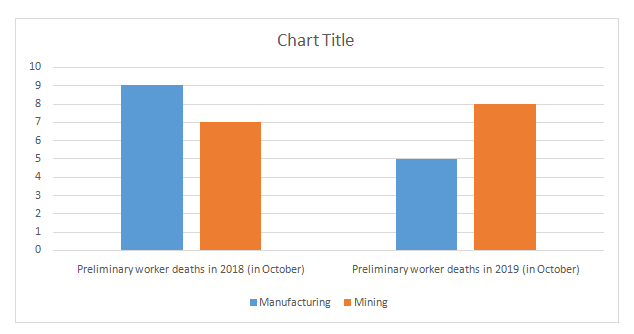 Job Role of Workers in Mines

The jobs of the workers in mines generally are depended upon the categories or segments like gas, oil, metal, non-metal and minerals. The basic job or the workers in mines is related to the extraction of a specific metal, coal, iron ore, oil or gas. They work under high-pressure conditions to extract the mines (Smit, et. al., 2016). They also have the responsibility of maintenance of the equipment and also supervision of the mining work.

For BHP Billiton, it is important to make use of aforementioned tools while formulating a comprehensive WHS policy. Through intuition based model, it can be able to understand the pattern of the casualties and can predict future possibilities. This would help in future planning for WHS. With the help of bounded rationality model, it can test the policy in a controlled environment and even the newer member can be able to give his thoughts and ideas. With the System one and System two tools, it can be able to analyse two views within a team and test the best one and implement in the policy.

Understanding the use of different decision-making tools in organisation where there is large amount of diversity can help in pacing up the process of decision-making. There are different members in the team and each one has certain role to play. Group dynamics helps in describing the impacts of mutual understanding among the team members and their behaviour with one another. It has been seen that a group with positive environment and high level of trust usually have a collective decision-making (Xiao, et.al, 2016). Hence, the managers and team leads should make effort to create a positive and supporting environment wherein members hold each other responsible for accomplishment of goal. This also promotes innovation in problem-solving process. The better the group dynamic is, better would be the information processing. This would ultimately results in sound decision-making process (Cui, 2016). During the whole exercise, it is realised that strengthening and promoting a socio-technical environment while ensuring the support of members during the execution of tasks can be a great challenge for the team leader but is worth attempting. Talking about the decision-making models employed in the report, all of them are logically sound and can help in resolving the complexities. They are developed based on the intuition and rational (Gardner& Bateman, 2017).

From the complete assessment practice, I have determined the significance of the decision-making in a group and its effectiveness in resolving the organisational challenge. In the very beginning of this work, I had no to little knowledge of how group dynamics work. Diving the work among ourselves based on the area of interest and experience, the work was distributed. Furthermore, I have determined that how the policy making can be carried out in the organisation based on facts and figure. I realised how research works are based on the data collected from various sources. I came to know the right difference between primary and secondary methods of collecting data and their importance in the research. I got to learn about the decision-making models and tools and how they can help the team leaders in managing the diversity within the team. As most of the team members have different background, conflicts are obvious among members. However, with the right decision-making model, these can be avoided in the earlier stage. They can help in establishing an environment that promotes coordination and cooperation among the team members. I got to learn some important aspect of data presentation and interpretation that would be helping me in future. Overall, it was a very good and learning experience for me and I am looking forward to work on similar projects in near future.