In year 1832 a bank name The Bank of Nova Scotia was established in Halifax with the motive of to facilitate the transatlantic trade (Wikipedia). Scotia was the first bank in Nova Scotia who held shareholder meeting and the initial president was William Lawson. National and international network was established before the 20th century. In the year 1883 Scotia Bank and The Union Bank unites after that the bank focuses on the oceangoing market and agencies open in Chicago, Minneapolis and so on and by 1889 Scotia Bank operates in almost 25 countries. In the year 1900 the head office of bank shifted to Toronto and also merger with other banks was done by “coast-to-coast” branch network moreover after the Second world war rise in economy guide a new growth for Scotia and the first women as a branch manager in Canada was appointed furthermore 1n the year 1960s and 1970s Scotia established its network in Asia and also varied its operations by acquiring major banks and in the 1990s Scotia expand its presence in the America and becoming one of the worlds truly international bank. By 2006 Scotia controlled the majority of Latin America (The Scotiabank Story: A brief history of Scotiabank, Scotia official website)and now Scotia is third largest bank in Canada and also known as “ Canada’s gold bank” and “serve around 24 million customers in 50 countries worldwide” in addition Scotia offers a wide range of products and services and scotia is serving people by “ more than 88,000 employees and $998 billion(as at October 31, 2018), additionally Scotia shares are trading on Toronto and New York exchanges(Scotiabank,2019).

Nova Scotia bank is one of the 3rd largest bank in the country with respect to its size of domestic and international markets, customers, share and divined holders. To strengthen its allies and explanations the bank is extensively moving forward in Latin American markets. Scotia bank is one of the Canada’s largest banks along with BMO, RBC, CIBC and TD. In comparison with its peers though the products and services provided by these banks are all the same but, Scotia bank stands apart from all of them with its strong international presence with countries like Mexico, Colombia, Chile and Peru. Though the income generated from its international markets is quite less than the domestic markets, but its international performance is far better than its peers.

There are three major significant factors contributing for the banks study financial growth:

Looking at it strong financial growth and performance in last couple of years across all business lines, With some weekness in some volatile segments such as trading, sceurity sales etc. Growth was obivous for the increased credit loans and mortgages happening in place for the extancive expansion of international markets as there is a huge push in pacific markets in the recent times. This is bringing a 15% of growth in the revene every year constantly.

Over the years from the inception of the bank in the year 1832 there was a continues payback to the dividend holders except in the time of Canadian recession. The company is reasonably valued, with a PE ratio of 13, slightly above its 10-year average of 11.3, and comparable to its peers.

Scotia Bank is showing its potential and study growth in its revenue earnings and this shows that the pay back interest rates on the dividends are going to increase along with its expansions and acquisitions with its foothold on Latin American and pacific region outreach. This increases the scope of the international market outreach for the bank’s future overall financial growth.

The Scotiabank has the diversification strategy in developing its business lines in order to have the sustainable earning in all dimensions.Business segments in this bank are composed of Canadian Banking, International and Global banking and market.

International banking(IB) has a variegate franchise that serves a lot of retails, corporate and commercial customers, which all supported by a wide range of employees, branches and business support centers. Obviously IB provides huge number of financial products, solution and advices centralized Latin American containing the Pacific Alliance countries of Mexico, Peru, and Colombia and the Caribbean and Central America.

This part explains and highlight the financial performance, current growth strategy, and capital deployment of the Scotia Bank. In addition to this, the summary of the annual report of the bank is presented here.

The year 2018 has been tremendously successful for the Canadian banking sector. The annual earning recorded was $4.4 billion. In addition to this, there has been a growth in adjusted earnings by 8% and mortgage growth, and margin expansion along with productivity improvement. Scotia bank has registered the growth in the net income by $1 billion in the last three years (Scotiabank, 2019). The bank has made a successful growth in the international market, especially in Peru, Mexico, Colombia, and other Pacific Alliance Countries. The current aim of Scotia Bank is to achieve over 9% growth in the international market. Currently, the bank is focusing on expanding in the Latin America and the USA due to high market opportunities. This comes from the corporate and institutional clients within or outside America. This attracts the attention of the management of the Scotia Bank to strengthen their presence within Latin America and the USA. Currently, the bank is 10th largest banks in terms of assets in the US and is operating with its strong wholesale business that are major contributors of the annual income of the bank. One unique thing about the Scotia bank is that it employs comprehensive series efforts that have been divided into three categories, namely People, Process, and Technology. It provides training to the employees and pay dividends to them (Scotiabank, 2019). They invest in skills and education of the employees. In addition to this, there has been a tremendous efforts taken by the bank in re-engineering the processes.

Being an international bank, Scotiabank is one of the leading banks of Canada and Pacific Alliance Region. It has over 25 million customers and deals in wide range of services, products, and financial advices regarding commercial and personal banking, wealth management, and private and investment banking. The business is quite diversified by geography and business that is characterized by growing earnings and sustainable growth in dividends.In 2018, the earnings per share growth was $7.11 with CAGR to be 7%. In addition to this, the dividend growth was recorded $ 3.28 with CAGR of 6%. Moreover, the return on equity was 14.9% which was higher than that of 2017 (14.7%). Bank is registering great success due to strong balance sheet, liquidity ratios, and capital assets (Scotiabank, 2019).

By making use of its strategic deployment approach of capital, the bank is making tremendous gain in the market share in the banking sector and increasing its scale day by day. With its stable and well-formulated risk management culture, the bank is dealing with market uncertainties and risks that might hinder the growth of the bank in the international bank. Talking about the earnings share from different region, Canada’s contribution is 56%, Pacific Alliance is 21%, the US’s share is 7%, and rest part of the world contributes up to 16% in the net earnings of the bank. 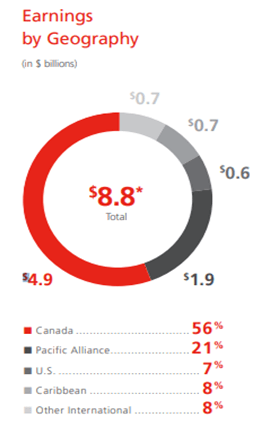