Decision-making is an essential part of conducting organisational tasks. It is a great challenge for business organisations to zero down on any decision out of many available options. In the following report, certain issues regarding the finance department of Torrens University has been discussed in this report. A reflection has been presented on the individual and group decision making. In the following report, a thorough discussion is provided on the factors affecting the effectiveness of the decision-making process. Furthermore, ways to reduces such biases are also elucidated. Moreover, three-decision making tools are illustrated in the report and their applicability in a particular scenario is also done.

As a Finance Manager at Torrens University, I am entitled to manage the funds. However, from the past three months, I realised that the operational cost of the University has increased up to 40%. The issue was discussed in the meeting and the concerning board members were informed about the issue. The discussion occurred in the meeting and certain solutions to the problem were given. As a Finance Head, the final decision lies in my hand and the respective decision-making happened after application of certain tools& techniques.

Being ahead of the Finance department of the university, I am very much familiar with the fact that the dthe ecision-making process requires solid facts and data. This would help in making the right decisions quickly. As there are many sources of data, there is a solid requirement for choosing the right one. Out of primary and secondary sources, I chose to go with the primary data collection. Therefore, I prepared the questionnaire for the staff member so as to explore their viewpoints about the increasing operating cost and factors contributing to it (Antunes, et. al, 2014). I could have gone for the secondary data collection but that would be injustice with the University as the real factor would haven't be discovered. However, primary data collection was a bit costly option and time-consuming as well but this was the need of the time. I also realised that it is very impractical to collect the data from each and every employee of the University, so I decided to choose one person from each department from whom the data was gathered. They were asked some questions in order to know their opinion about the factors or cause for increasing operating cost (Kou, et.al, 2016).

Before discussing my decision-making style, it is important to understand that for the University to use its resources in attaining competitive advantage. These are usually dependent on access to reliable and genuine data. There are usually two types of competitive decision-making approach I came across during this whole process, namely competitive and collaborative decision-making (Antunes, et. al, 2014). I understand that the Torrens University in order to make the best utilisation of its disparate resources for protecting the goals between and within functions must go for collaborative approaches rather than the competitive ones. These approaches are elucidated below for a better understanding:-

This is usually seen in those organisation that is competing with peers to gain resources. In addition to this, the structure of the othe rganisation can result in vertical or divisional grouping and make strong bonds. In simple words, the decisions are made only to make the organisation competitive. Usually, the decisions are made based on secondary data, such as an annual report, financial statement, etc. The implementation of such decisions is completely dependent on the flexibility of the value chain processes of the organisation. The measure of a successful decision is measured by the profitability and business growth (Kou, et.al, 2016). Now looking into the usefulness of this type of decision-making, this is nowhere relevant for the organisation. The rising operational cost issue cannot be solved just by making use of competitive decision-making.

Talking about the collaborative approach, it develops rigid inter-functional and functional bonds by encouraging common goals allowing different department in the University to make decisions. This is usually achieved by sharing information, willingness to share success and failure, and strong managerial interaction. In the following case, the group decision-making takes place once the data got collected and the information was shared with all the participants in the meeting. The main aim of the meeting was to decide the solutions for reducing the operating cost of the university. It was identified that maintenance cost and services purchased (electricity, catering, advertising, travel expense, and other expenses) are very high. Hence, the decision committee has decided to control the maintenance cost and cut unnecessary expenses.

According to Antunes, et.al, (2014), there are three sequential stages that make up the group decision-making. These are orientation, evaluation, and control. Usually, it has been seen that each step can be affected by some sort of biases. The common biases are social loafing, groupthink, escalation of commitment, and group polarisation. All these factors have a great potential to impact the organisational decision making wisdom negatively. As a Finance head, I am obligated to either avoid or reduce these biases in the first place. This can take place in many ways. First and foremost is establishing trust among the group member. Another one is offering equal chances to every member to present his/her views in the group meeting and carry out thorough discussion on the proposed solution. The lack of clarity in work among the employees is resulting in a wa aste of resources and time (García-Peñalvo&Conde, 2014). This is also increasing the operating cost of the University. Hence, the senior management and Finance Head along with the HR manager of the institution should think about implementing some sort of system that would provide clear directions to the workers. This can be done by assigning work on the ERP system of every employes along with well-defined deadlines and outcomes or expectations.

Visualisation of the Decision-Making Process & Analytics

Decision-making is a critical part of every organisation and it as certain modus operandi. In case the desired structure is not followed, then this would result in some serious issues for the company. 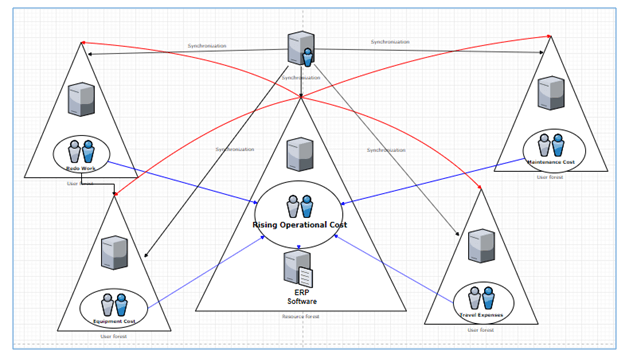 The process with some visualisation is given below:-

Determination of Issues: The existing operation cost of the University has increased up to 40% and this is a concerning isses as it would affect the bottom line of the company (Antunes, et.al, 2014). In the existing situation, it is important to determine the factor contributing to the poor performance of the organisation.

Collection of Primary Data: Once the issues are identified, the questionnaire is prepared for collecting data. The head of each department is interviewed regarding the issues their subordinates are facing (García-Peñalvo&Conde, 2014). The most common issue identified is the poor direction and leadership from the head are resultingan in increment of faulty work.

Analysis of the Data: When this data is gathered, I positioned those issues according to their possible effect on the University. Examination of the information is done so as to a the helpful deduction out of them (Govindan, et.al, 2015). I evaluate contrasted perspectives related to the feasibility, value, and appeal. This has helped me in the achievement of the best outcome.

Accessing Alternatives: By utilizing basic tools for making decisions, I positioned the options and think about them dependent on their advantages and disadvantages. A choice framework is utilized for the audit of the options. I attempted to decide the best choice desdent on the information examination I did.

Decision-Making: As I had various options, I picked the best one to resolve the issue. I asked the HR manager to change the work allocation in part of the the repart of the University. Earlier work was being assigned manually without any deadline and expected outcomes. This resultedthe in loss of time and resource.

The following assessment helped in getting a thorough understanding of the decision-making process within an organisation. In this report, an issue of rising operational cost has been talked about and the deci-ion making process has been elucidated thoroughly. The whole process was explained in visualisation form and the process was explained. It was determined that there are three sequential stages that make up the group decision-making. These are orientation, evaluation, and control. Usually, it has been seen that each step can be affected by some sort of biases. The four decision-making tools were explained and their applicability was explained here.