In this report, the discussion on the Greenhouse Gas Emission was carried out, wherein it was determined that each and every sector somehow contributes to the generation of the GHGs. The understanding of the European Union Emissions Trading System was developed and how the organisation is obligated to operate within emission allowances was elaborated. It was mentioned that the company is required to surrender certain allowances as to make up for the emission otherwise heavy penalty will be imposed on it. A comparison between the manufacturing and energy sector was drawn and was identified that the manufacturing sector would show a constant value of emission between 2015 and 2035. Based on the analysis, certain recommendations for the business entity had been provided in the report.

Green House Emission in today’s time is increasing at an alarming rate. With the increasing concern for the rising GHE, various stakeholders in governmental, corporate, and non-governmental bodies are working on recognising the need for genuine, accurate, and credible information related to the reduction of GHG emission. There are a few standards that have been developed for authenticating Green House Gas emission for a particular program. In this report, the data associated with the GHG emission have been analysed so to evaluate the impact of the analytics on the manufacturing sector. Based on the inferences from the data, certain recommendations are also provided in the report.

The greenhouse effect is characterised by those gases that absorb heat and radiation. These comprise methane, ozone, methane, nitrous oxide, water vapour, carbon dioxide, etc. Out of this Carbon Dioxide is the prevalent greenhouse gas and hence, it is worth discussing component for the climate change globally. In one of the studies conducted by EPA in 2014, CO2 forms 81% of total greenhouse gases (Kaygusuz, 2009). Due to rapid industrialisation from the 19th century to the present day, the concentration of the CO2 has been increasing and reached 43%. According to EPA, every year 29 billion tons of CO2 is released in the atmosphere by virtue of human activities, especially the burning of fossil fuel for the production of energy (Kaygusuz, 2009).

For the business organisations, the EU Emissions Trading Systems (EU ETS) is the foundation of the EU’s policy to curb the problem of climate change and its prime tool for minimising the emissions in a cost-effectively. The system was set up in the year 2005 and was the first of its kind international emission trading system. EU is supposed to be prime carbon market in the world. From the organisation's perspective, EU ETS is founded on the principle of ‘cap & trade' principle. The cap is the maximum limit set for the total emission from any installation or a process of a system (Fuss, 2014). This limit is gradually reduced in order to reduce the total emission. The EU ETS is encouraging the development of worldwide emission trading. In addition to this, the system aims to link itself with another compatible system.

For a business entity, this cap or limit is important as it has to purchase emission allowances that can be tradable with other businesses in need. In addition to this, businesses can also purchase or trade international credit with one another. The value of the business is decided by the limit on the total allowances number available with the firm (Hayes& Knox-Hayes, 2014). The reason for emphasising on the allowances is that the company is required to surrender certain allowances as to make up for the emission otherwise heavy penalty will be imposed on it. Furthermore, if an organisation is left with some spare allowances, then it can cover all of its future needs with them or else sell them to other firms in need. The overall purpose of trading of allowances is to ensure a reduction of emission and promote low carbon technologies and investment (EU Open Data Portal, 2018).

GHG Emission in Manufacturing vs. EnergySector

In this section, two of the prime sectors of EU have been compared with each other on GHG Emission over twenty years i.e., from 2015 to 2035. It is important to note that GHG emission is expressed in ktCO2e (kilotonne CO2-equivalent). From the figure given below, it can be seen that GHG emission in the manufacturing sector is not changing much. In fact, the slope is slightly raised in the coming years. This can be understood by deconstructing the processes followed in the manufacturing sector.

According to the EU Open Data Portal (2018), nearly 14% of the total emission is produced by the manufacturing sector (see appendix 1). This is primarily due to the burning of fossil fuels for producing energy. In addition to this, the energy is released during certain chemical reactions necessary for manufacturing certain products. On the other hand, the energy sector’s share in the total greenhouse gas emission is nearly 36% (EU Open Data Portal, 2018). This comprises the production of electricity, especially from burning of coal for generating heat in the thermal power plant. According to Weber(2010), nearly 65% of the energy in the EU is generated from the burning of coal and natural gas. However, from the graph shown above, it can be seen that the trend is lowering down (see figure 2). This can be attributed to the fact that businesses are shifting from non-conventional energy to clean energy sources. In addition to this, the government is also making efforts in providing subsidies and tax relaxation to the organisations aiming at using clean energy in their processes. The trend is pretty much good in this sector also because of developing more efficient processes of production (Kucukvar, et.al, 2013). The main reason for such effort-taking is the use of high-quality products and machinery. In addition to this, one can see a shift towards modern production processes. 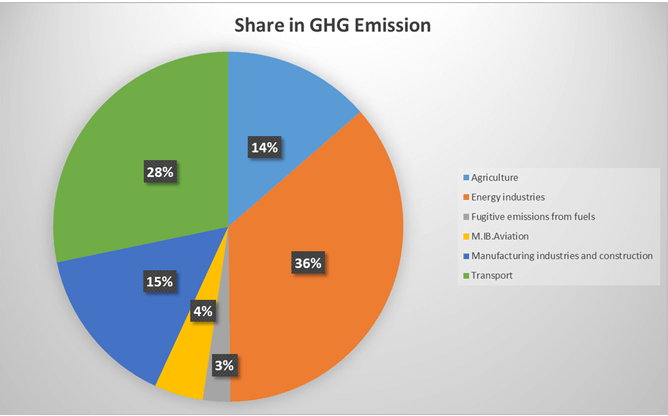 It can be seen that cumulatively, both manufacturing and energy sector have a 50% stake in the GHG emission within the EU. If one can control the production of greenhouse gases from these two-sectors, then this would be a tremendous effort (Lee, 2012). From the business perspective, it is important to reduce the emission of the greenhouse from various activities and operations (van der Linden, (2017). For instance, solar energy and another source of conventional energy can be used. This would be helping greatly in lowering down the carbon footprint of the organisation in the manufacturing sector. 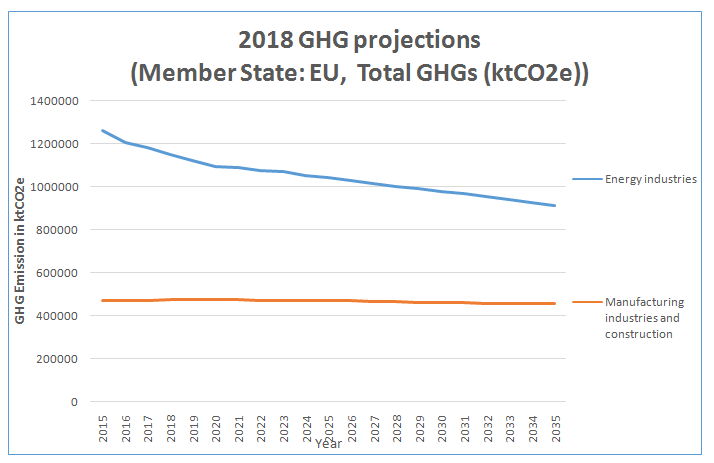 To improve the functioning of the organisation while controlling the greenhouse emission, there are certain recommendations provided here:-

In conclusion, it can be said that climate change is one of the strategic issues for an organisation. It is one of the primarily debating topics due to consumption and depletion of resources. During the analysis, it was determined that every organisation operating in the EU has to comply with the cap limit of Greenhouse emission and consequentially, has to buy the emission allowances. Failing to this would result in a serious penalty. It was identified that for positioning itself so as to respond to corporate and societal issues and stresses resulted from climate change, businesses have to recognize climate change in strategic planning. Based on the analysis, certain recommendations have been provided for the organisation in order to improve its business operations.

Appendix 2: Total GHG Emission Projections of Manufacturing and Energy Sector between 2015 and 2035