Marketing management is nothing but the process of formulating strategies and plans that is used for running the business of organisation. For this process, corporation- al audit is needed to be conducted. Certain tool and techniques are required to be used that are pestle analysis, porter's five forces analysis, swot analysis, etc. This all things are covered in this report. Apart from this, marketing mix has also been described in detail whereby terms like price, promotions, process, people, physical evidence, etc. are explained. It is to be noted that the complete file is based on Virgin Atlantic corporation and all the aspects is deal in this context.

Marketing management can be simply defined as the process of formulating strategies and planning for the goods and services , sales, promotions, advertisement, etc. for reaching to desired customer segment (Navarro and et. al., 2011). For this procedure, tools from competitive strategy and economics is employed in order to evaluate the industry context in which the company operates. These involves porter's five forces, investigation of strategic groups of competitors, value chain analysis and others. The management of marketing is very essential for every firm as it provides them idea and ways to run their business efficiently. As taste and preferences of customer changes with time to time, so company needs to plan their strategies of doing marketing in accordance with that. For this, firm need to conduct survey and examines the current needs of civilians as well as their culture in order to offer them products or services as per their demand and which match with their culture. The present report is based on the Virgin Atlantic. In this project, some necessary conditions has been explained by which consumer loyalty can be built. For doing this, marketing audit has been done by using PESTLE and SWOT analysis. By doing pestle analysis, Virgin Atlantic can easily find out the influence of its external factors like government, technology, society, economy of nation, environment, etc. and after that they can run their business in that manner so that they get less impacted from all of these factors. At the same time, by doing Swot analysis, venture can explore its own strength, weaknesses, threats and opportunities as well. This will help them in knowing about themselves in effective way and they can take appropriate measures to minimise its weaknesses and can adopt strategies for coping with their threats.

Virgin Atlantic is a European aviation company and its head quarter is situated in Crawley, United Kingdom. This airway organisation was set up in 1984 as British Atlantic Airways and was in the beginning planned by its co - founder Randolph Fields and Alan Hellary for flying between Falkland Islands and London. After that the name of corporation changes to Virgin Atlantic Airways as Fields sold-out his stocks in the firm after-ward dissonance with Sir Richard Branson on the administration of the venture. It has been examined that this company had approx 8,875 workers in the year of 2016 and are growing afterwards. It serves for around 29 destinations. The airway along with the Virgin Holidays is operated as well as governed by a belongings enterprise known as Virgin Atlantic Limited, which is 49 % governed by Delta Air Lines and 51 % owned by Virgin Group. This venture utilises a mixed fleet of Boeing wide body aircraft and Airliner and is operating its designate in Asia , North America, Caribbean, Africa, and the Middle East from its important bases at London Heathrow and London Gatwick as well as from its alternative base at Urban centre (Miquel-Romero, Caplliure-Giner and Adame-Sánchez,2014). In addition to this, Virgin is also operating their seasonal flights from Belfast and Glasgow. It has been found that its aircraft includes three cabins that are Upper, Economy and Premium Economy class. From the investigation, it has been examined that Virgin Atlantic had offered services to 5.4 million travellers and this made it the 7th largest United Kingdom airline in context of mass of passengers in the year of 2012.

In strategy of marketing and business, market position simply refers to the perception of customers to brands or products in comparison to the goods and brands of others. So, market positioning can be defined as the method of establishing the image of a product or services of a corporation within market place so that customers prefers them most in relation to other firms. There is a strong market positioning of Virgin Atlantic in UK as it comes among the one of the oldest firms within United Kingdom. People living there mostly prefers them for taking any tour as they trust on their quality of the services and products. This shows that Virgin is successful in establishing good loyalty among their passengers. And this is the main reason of their strong market presence in not even UK but also in other countries. They has established an advertisement movement that concentrates on its clients' travel desires as it looks to position itself as a “client centric” airway (Michaelidou, Siamagka and Christodoulides, 2011). It is a global TV ad movement that involves around 30, 60, 80 second TV and cinema spots that is launched on 3 Jan that consist of print, out of home, digital and societal mediums. These all promotions are promoting the location or areas that Virgin flies to and the experiences available in each. This ad follows a traveller on his way for pitching a business idea. It has been noticed that Virgin Atlantic is naturally attracting those passengers who are passionate about hunting or seeking new experiences and this advertisement throws down the challenge to them for turning their ideas and dreams into reality. For this activity, company recently team up with Microsoft in order to give it control of various aspects of the in - flight experiences like positioning of seats, temperature and lighting in real time as users move around the aircraft, with the usage of Xbox Kinect technology.

Virgin has targeted the upper class consumers who are mainly business passengers and are travelling on transatlantic routes. They realised the chance to gain a considerable market share via effectual marketing of their fun, honest, quality, caring and innovative airline. Marketing activities of Virgin have incremented the brand preference over time. In May 2009, this firm has published around 68 million Euro, on the contrary British Airways faced a loss of approx 401 million Euro. Virgin has invested a sum of 20.77 million Euro in field of marketing communications. They also have launched their latest campaign with “ Flying in the Face of Ordinary “ along with its international brand scheme in the year of 2013.

Analysis of the current market situation

Virgin Atlantic's success is not down to passengers flying on it as they buy into a philosophy, but as it provides a better services and products at a competitive cost. Presently, Virgin Atlantic is one of the major airway company in all over the world, having a fleet of 38 planes by offering services to 34 routes and also are gaining large number of awards. This has been examined that due to current political instability in the middle east, specifically in Syria , the price of oil get rising. Thus, this is a clear threat to the airline industry that they have to increase their airfares or charges of travelling (Marshall and LaMotte, 2011). From previous 2 years, the world does not feel reduction in the prices of oil below a 100 dollars. Still, in 2013, the costing of fuels have stayed below the levels of past years. This makes them able to minimise their operating expenses. However, sinking fuel prices are also a signal of a weakening economic condition that in the end would impact the demand for global air travel. The instability in economy has also effected some of the challengers of Virgin as, regarding geography, the UK and German markets have recorded a better performance in comparison to rest of the Eurozone. This shows that there is golden chance to grow for the cited firm as they can take routes of their competitors that are presently in a nation that is giving poor performance in relation to UK.

A unique selling proposition is nothing but a factor that differentiates a goods or services from its competitors, such as highest quality, lowest cost or innovative products. Virgin Atlantic is having a unique selling proposition (Merrilees, Rundle-Thiele and Lye, 2011). They are providing best quality services and products to their passengers in relation to other airlines corporations. They offer common cargo goods and provides great services so that customers feel good and travel a smooth journey. They are also giving cashback offers to their bookers. For example, 15,000 cash back can be provided to those users who will book their flights tickets. Apart from that they are assuring their clients about safe and secure journey as they recruit one of the best pilots of the world.

Marketing audit simply refers to a comprehensive, organised, independent and continuous investigation of the marketing environment of company's strategies, objectives, aims and all activities in order to identify problem areas as well as opportunities. In addition to this, plan of actions is also suggested for improving the marketing positioning of venture. Some of the key tools and techniques that can be used for carrying out market audit are listed below :

This is tool for finding the impact of external factors on the performance of an enterprise. By examining influences of those factors company can adopt certain strategies in order to cope with that. Pestle analysis of cited firm is discussed below :

Porters five forces analysis is tool for evaluating five factors that aids in determining industry competition. Those five forces are described below : 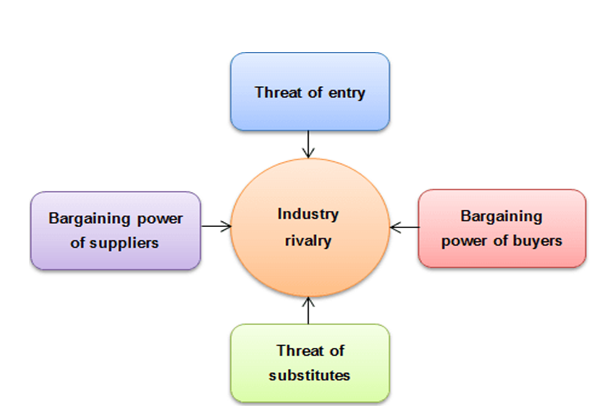 Expansion is an important criteria of making profit and and having growth which is possible through Marketing mix . It is regarded as the foundation model of marketing. Marketing mix is defined as the composition of set of tools used to achieve marketing objective in target market. The wide variety of market mix are divided mostly into 4 parts named as 4 Ps (product, promotion, price and place) and the whole marketing strategy decision has been evolved regarding these marketing mix decisions.

From the above based report, it can be summarised that management of marketing is very crucial for each and every firms as without this they cannot achieve their aims and objectives. Thus, Virgin Atlantic should also concentrates on designing their marketing strategies so that they can run their business effectively. For this purpose, they have to examine their strength, weaknesses, threats and opportunities as well. In addition to this, they also need to find out the impacts of external environmental factors like political, social, technological, economical, legal factors, etc. on their business. And these work can be done by doing organisational audit. This has been clearly explained in this project. Apart from this, the marketing mix has been also discussed in this assignment so that company can fill the gaps existed in the marketing strategies and the exterior surroundings.

someone in is bought