The history of Ontario dates back to the millennia. For more than 7000 years humans are living in this province of Canada. It is the most populated province of Canada. The first nation groups of Ontario were Algonquin. They were Iroquois and migrant hunters. Ontario is known for its varied landscape and vibrant multiculturalism. Its area is 10.8% of Canada’s total area. Out of its 1,076,395 km2, the land coverage is 917,741 km2and area under water is 158,654 km2. Ontario shares its borders with Hudson Bay, Manitoba, James Bay in the north and Quebec in the east.

The economy of Ontario is dominantly dependant on its natural resources, manufacturing, agriculture, and service industry. Ontario contributes 37% of the national GDP and is currently providing employment to more than 50% of the workers indulged in high-tech financial services and other industries. Being a part of the North American Free Trade Area, Ontario generates over $18 trillion (Winfieldand Dolter, 203). Talking about the manufacturing sector, the key manufacturing industries are pharmaceuticals, automobile, ICT devices, medical device, biotechnological machines, etc. As per the data provided by Statistics Canada 2015, more than 88% of automobile manufactured in Ontario are exported to the USA. More than 50% of the high quality, high yield farms of Canada are located in Ontario and contribute one-fourth of agriculture revenue in Canada (Flick, et.al, 125). Agriculture production comprises apples, berries, grapes, vegetable, cash crops, etc.

A brief overview of the natural resources

With its varied landscapes, Ontario has a plethora of natural resources. It has innumerable lakes, streams, and rivers that play a significant role in the development of the province. They serve as a source of food and means of transportation and determine the pattern of industrialization and settlement in earlier times (Stokes, et.al, 495). The St. Lawrence River basin and Great Lakes contributes majorly to over 75% manufacturing industry, especially to food processing and agriculture. The forest area is 66% of the total Ontario's land and provides 55000 jobs in the forest-based industries. In addition to this, over 2, 50,000 direct and indirect jobs are provided to the communities of Ontario (Government of Ontario, 2017). The mineral production in 2018 in Ontario was nearly $10 billion. In terms of productivity, Ontario is a global leader and follows almost all environmental standards. It is famous for nickel, platinum, copper, gold, Zinc, lime, gypsum, and sedimentary rock. In addition to this, the presence of oil and natural gas in the region is another plus point for the region. 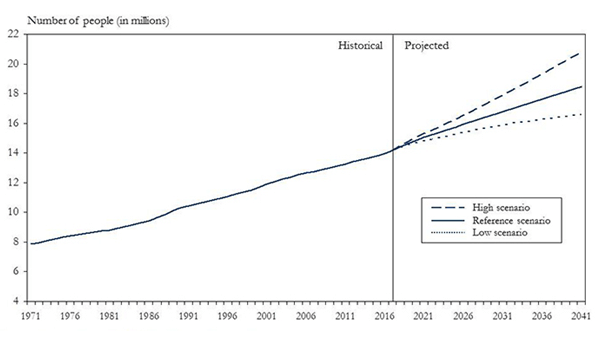 As per the data provided by the Ministry of Finance Projection, the growth in population will be more in the GTA and gradual in the north and south regions of Ontario as shown in figure 2 and 3 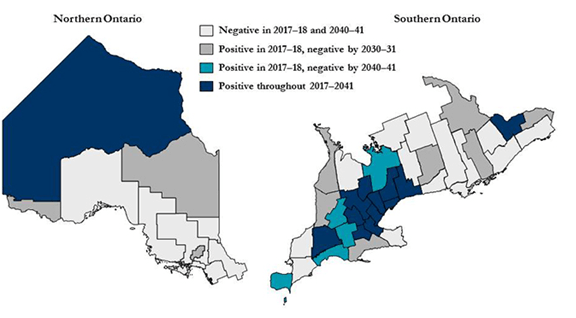 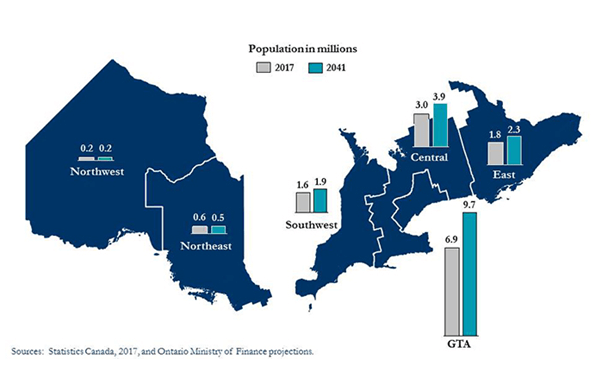 The Core and the Periphery Areas

Friedman's core/periphery model is introduced to comprehendthe regional-economic relationship in Ontario. The model can be used to understand the spatial nature of the economy of Ontario while the region is under the influence of changing technology and mark the golden future for Ontario among other provinces. Southern Ontario is the main part of Ontario province being economically and culturally strong and densely populated (Mitchell, et al, 470). Therefore, it can be stated that Southern Ontario and GTA are the core areas, whereas the northwest and east areas of Ontario can be called periphery areas. Due to cumulative advantages, such as geographic situation, good transportation route, large market opportunity, stability in the political environment, and government support has reinforced the growth of the core as well as the periphery region. However, it can be seen that the region has undergone economic turmoil in the past ten years. The increase in the average rate of spending was 4.6%, whereas the economic growth rate increase was 3.1% (the government of Ontario, 2017). Currently, it is regaining its status of being an economic engine for the country. In 2017, the GDP of the region experienced a rise of 3% symbolizing the rejuvenation of the economy of Ontario.

The Fault Lines in Ontario

Canada has many existing fault lines and tension cracks. According to Allegra, et.al, these appear due to tectonic forces in the earth crust (568). According to Bone, the four fault lines have divided Canada into different characteristics (Allegra, et.al,570). Even though these fault lines have threatened the country, Canada is still sustaining. This has been achieved majorly by making use of compromise.Talking about the Indigenous and non-indigenous fault line which is still existing in the country and is still the intricate one. In the next 10 years, the fault line won’t disappear. According to Statistics Canada, 65% of Indigenous people agree there is a strong need for reconciliation between the Canadians and Aboriginal people.Government is taking steps to reduce the gulf between the two communities (Rosella, et.al, 532). Policies have been made and special status is being provided to the indigenous people in order to safeguard their culture along with the development undergoing in the country. In the next 10 years, the fault line will shrink for sure due to the steps taken up by the government and policies made by them to address the individual. Nearly 100 treaties have been signed between the government and Canada's Aboriginals. One of the most positive agreement was signed in 1999 that enhanced the autonomy and power control of the land of the Aboriginals in Canada.These are some active steps taken from the government.

There are many major challenges faced by Ontario. The first and foremost is the meager growth in the economy and increasing demand and supply gap in jobs. Currently, the government is focusing on economic growth without much focus on creating permanent jobs. The other challenge is the energy issues and the rising price of gas and natural fuel (Calvertand Mabee, 212). This has increased the concerns of the industrialist in the region. The other issue is the government's effort failed in health sector putting a negative impact on economic growth. To resolve the energy issue, the government should think of a renewable source of energy instead of fossil fuels (Winfieldand Dolter, 201). In addition to this, it should provide subsidy in the health sector and promote the public-private partnership model to provide better services.

In this report, the discussion on Ontario’s economic, regional, social, and other features had been done. The economic activities majorly contributing to the economy had been discussed and their contribution to the GDP of the country had been outlined. The challenges faced by the region were also enlisted.